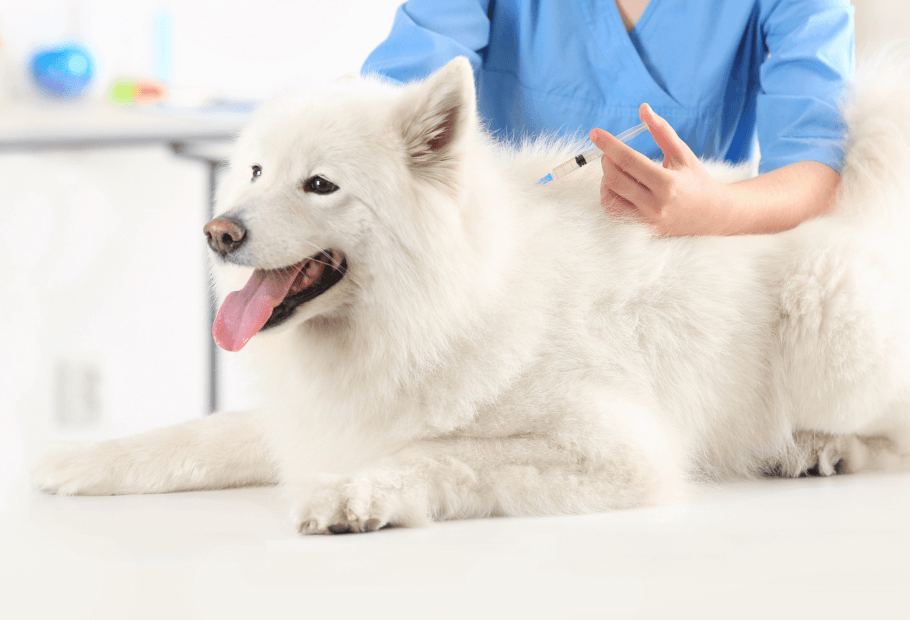 Young animals are like kids–it’s a never-ending job to keep them safe and happy. Vaccinating your pet is a relatively inexpensive but very important way to protect his or her health.

In addition to preventing many life-threatening illnesses, vaccinations can prevent diseases prevalent in wildlife and those that can be passed to humans. It’s important to administer vaccinations when pets are puppies and kittens because their young immune systems are still developing and need protection to stay healthy.

While any medical treatment involves some degree of risk, in the case of vaccinations, the benefits far outweigh any potential side effects. Adverse reactions are rare and usually mild and short-term when they do occur.

Which vaccines should your pet have? “Core” vaccines are those recommended—and possibly mandated by law—for most pets. Core vaccines include:

Other non-core, but highly suggested vaccinations for dogs include Lyme and leptospirosis.

Canine Lyme disease, or Lyme borreliosis, is a bacterial disease transmitted by the bite of an infected Ixodes tick harboring Borrelia burgdorferi, a corkscrew-shaped bacterium. The disease is not passed directly from animal to animal or from dogs to people.  Early signs of Lyme disease in dogs usually include fever, depression, and listlessness.  If the disease is not treated, later signs may involve the joints and kidneys and less commonly heart and central nervous system. In most cases, the infection and its signs can be controlled by antibiotics, especially if treatment is started early. Delayed or inadequate treatment can lead to the more serious signs, which are often disabling and difficult to treat.

Leptospirosis is a serious infectious disease caused by Leptospira bacteria. It occurs in domestic pets, wildlife, and humans. Leptospirosis poses a significant threat to dogs, but it is rare for cats to contract the disease. It is considered to be a significant public health threat, as it is zoonotic, which means that infected wildlife and pets can transmit leptospirosis to humans.  Leptospira bacteria are shed through the urine of infected animals, including wildlife like skunks or foxes, farm animals such as horses or pigs, rodents in urban areas, and other dogs. Wildlife serves as the natural reservoir for leptospirosis, which ultimately puts all dogs at risk, even those in more urban and suburban environments.  Some dogs never display any signs of illness. Others may suffer from a lack of energy and show signs of depression. Some may display any or all of the following signs:  decreased appetite, vomiting, abdominal pain, fever, jaundice, changes in urination patterns or frequency.  A recently published retrospective study showed that just over 18% of dogs admitted to a university with renal pathology had undiagnosed leptospirosis. If the disease is not treated, some dogs become very ill and can even die. Lepto kills up to 1 in 5 clinically infected dogs.  Even if the dog recovers, long-term consequences can include reduced kidney or liver function.

Bordetella (kennel cough) and canine influenza vaccinations are recommended for dogs that frequent dog parks, boarding kennels, or any place where they’re socializing with other canines.

FeLV (Feline Leukemia Virus) is a non-core vaccine recommended for some cats.  This viral disease attacks the immune system and leaves the cat vulnerable to a host of secondary infections.  There is no known relationship between FeLV and leukemia as it occurs in humans.  Because the transmission usually occurs through contact with other felines, those cats that live with FeLV-infected cats or are allowed to roam outdoors are, particularly at risk. Most FeLV-infected cats have no clinical signs until another infection occurs, but typically experience:

It’s also important to note that even pets who live primarily indoors should be vaccinated, as they can still be exposed to a . Your Madison Animal Hospital veterinarian can advise you which vaccinations are required or recommended for your pet based on age, health, and lifestyle. For more information or to schedule an appointment, call us at (207) 696-5200.

Make an appointment
with us today!